With 15 years of successful music career in Mozambique, Neyma is one of the most popular and charismatic national artists, and a prominent children’s advocate. Neyma participated in various social campaigns throughout her career, including tackling youth alcoholism, combating drugs, HIV and AIDS, among others. Neyma has also been supporting the breastfeeding promotion over the past years in collaboration with the Ministry of Health and UNICEF. Neyma is the second personality (just after Stewart Sukuma) more involved and committed with UNICEF Mozambique in outreach activities in the last 5 years:

In December 2012 Neyma decided to focus her artistic career on children, launching the brand Neyma for children related projects and products, starting with her first single for children, called “Parabéns” (Congratulations) which she has made available for free download from her facebook fan page. She launched the music video for Parabéns in 2015.

Photos of Neyma in the Community 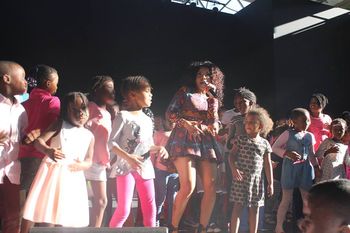 Share photo gallery
Watch Neyma's video Sofrimento featuring Stewart Sukuma, launched in partnership with UNICEF Mozambique. You can also listen to the original music below, and even download it for free!
Tweets by NeymaUNICEF